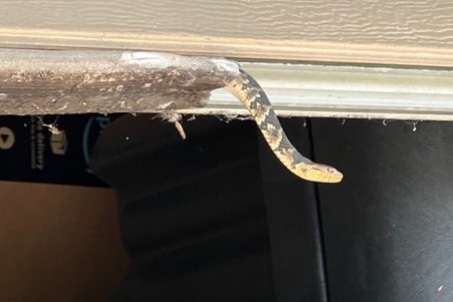 These are some of the creepy creatures that I saw around our home and neighborhood.  Never walk near any pond or lake.  However...the joy is to see beautiful turtles, ducks and birds.  Look at my other posts to see photos.

Alligator with an orange head.  The other creature looks like an American Crocodile.  The snout is different, pointed.

I have seen alligators with various colors: black, brown, green, and orange or white on their heads or snouts.

Iguana climbing the window.  I had no idea iguanas could climb up windows. Here is another iguana looking inside the house.  Creepy but we had a good laugh.

The snake on the left is a Water Moccasin (according to security when I showed them this photo).  It is venomous.  I do not know the snake variety for the monster snake on the right photo.  It looks like some type of water snake.  I walked up the street and it was not there.  On my way back, the snake was on the street.  Ugh...

These snakes are not venomous, but they are creepy.  The yellow pattern snake was stuck in the bottom of my friends' garage door.  Security used a stick and snake retriever to remove the snake and relocate it.  The other snake...we lifted the pool cover and it popped out.  Freaked out and ran, so never got a good look at it...probably harmless.  Ugh...run.

Big frog in the lanai.  It could not figure how to get back out.  Used a broom to nudge it.  Then it hopped out.  On the right, a toad in the house.  Scooped up the toad inside and released it outside.  I do the same thing with the little lizards: use two cups to capture them and then release them outside.  "Bye.  Have a good day."